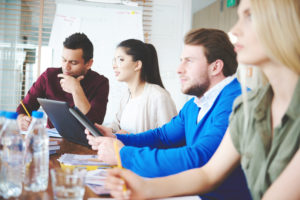 You don’t have to work in HR to know that salary is a delicate subject. Just ask an acquaintance, even a close friend, how much they make a year, and watch an eyebrow go up. When it comes to employees working at the same company, or doing the same job, the situation gets even stickier. If you’re in charge of determining the pay policies for your employees, you want to be fair and equitable, but you also need to keep an eye on your labor costs.

Can salary history alone be used to determine pay? Or does that practice risk perpetuating historic pay discrepancies—especially those between the sexes?

Thanks to the recent decision in a California case, the Supreme Court may be called upon to resolve an appellate split on the issue.

Aileen Rizo, a math consultant in the Fresno County, California schools, learned that she was being paid less than every one of her male colleagues with the same job. She sued, claiming a violation of the Equal Pay Act.

Fresno County defended its policy of basing pay decisions solely on prior salary. The county claimed four business reasons for the policy:

A district court initially ruled in Rizo’s favor, citing discrimination concerns. Prior salary, they wrote, is “so inherently fraught with the risk…that it will perpetuate a discriminatory wage disparity between men and women that cannot stand, even if motivated by a legitimate nondiscriminatory business purpose.”

The 9th U.S. Circuit Court of Appeals reversed the decision in April, concluding that, under the Equal Pay Act, prior salary can be a legitimate factor, apart from sex, in setting wages, if it supports a business policy and the employer uses it reasonably in line with stated purposes and practices.

The 10th and 11th Circuit Courts have reached the opposite conclusion in similar cases (Angove v. Williams-Sonoma, Inc. and Irby v. Bittick respectively). Though Rizo’s attorney hasn’t definitely decided on an appeal, he did reference the discrepancy in opinions, noting, “The logic of the decision is hard to accept. You’re okaying a system that perpetuates the inequity in compensation for women.”

Some states currently offer broader protection than the Equal Pay Act, for example Massachusetts, where employers, as of 2018, will not be permitted to ask about salary histories. And California, where Rizo’s suit was originally brought, now has the Fair Pay Act, which limits pay discrepancies between men and women doing similar work to a few acceptable factors such as seniority, education, or “quantity or quality of production.” Since Rizo’s claim predated California’s Fair Pay Act, she did not sue under it.

However long the appellate split stands, employers should keep an eye on the question of salary history, and how your business might be affected if the law were to change. If you have questions about your company’s pay policies, don’t hesitate to contact your Axiom representative.